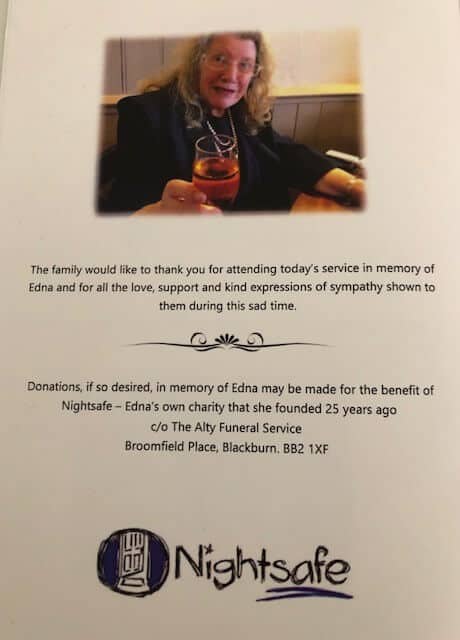 THE funeral of Edna Arnold, the former Tory councillor who founded Blackburn’s Nightsafe refuge for the homeless, has taken place at the town’s Cathedral.

Edna, alongside Paula Kanuik established Nightsafe in 1990 in response to the identification of increasing numbers of young homeless people in Blackburn with Darwen.

Throughout its existence Edna has been a committed supporter of the charity, being actively engaged in fighting for the rights of young people. She devoted every Boxing Day to attending the open door party and frequently advocated on behalf of the charity and service users at the highest level. She was never afraid to challenge the status quo and her work as a trustee and subsequently Life President is demonstrated to this day in the quality and scope of services we offer.

2015 – Nightsafe Celebrated 25 years of work with young people who are homeless or at risk of becoming so. We had a great celebration event at Ewood Park – ‘ Bit of Doo’ and an anniversary Sleep Out in The Mall when we were visited by Storm Desmond!

Sadly we lost founder member Paula Kanuik one of the founders of Nightsafe and our CEO for over 20 years, Paula’s contribution to the work of Nightsafe and the positive impact on the lives of young people cannot be put into words. Her passing was a great personal and professional loss to many not only in Blackburn but across the world, she truly touched the lives of everyone she came into contact with.

In her memory we launched the Paula Kanuik Art Fund which we will use to enable young people from Nightsafe to have the opportunity to explore their talents in creative arts, an area of life Paula both enjoyed and encouraged.

Edna will be sadly missed by all at Nightsafe but we will be working to ensure her legacy is protected and built upon.

This isn’t the first time James has taken part in fundraising events for Nightsafe. Having listened to his friend BeBe talk about the charity and how it supports homeless young people as well as taking part in the Stonyhurst Sleep-In last year, James decided he wanted to create his own personal challenge to raise money for other young people who are not as fortunate as himself.

BIDS for limited edition Nightsafe Adidas trainers reached over £800 when they want under the hammer recently. In 2019, 160 pairs of the green and red ‘Blackburn’ Spezial trainers – colours which represent the red rose of Lancashire - went on sale at a special exhibition in Blackburn.

Crown Paints lent their support to Nightsafe - with a generous donation of paint and equipment as well as time towards our charity’s refurbishment of the emergency night shelter. The team of six volunteers from Crown, based in Darwen, joined a further six from Blackburn Round Table, giving up their time over the course of a weekend.

Kris Connolly is putting his best foot forward – after pledging to run 100 miles in October to raise money for Nightsafe, a youth homeless charity. After a long period without training, Kris, 30, the new Vice Captain of Typhoons RUFC, set himself the challenge to get himself ‘match fit’ and raise money for a worthy cause in the process.

Scouts give up their beds to raise cash for homeless charity

East Lancashire after taking part in Nightsafe’s Sleep In. Dave Mellor, Scout Leader, said the unit took part after being told about the Blackburn-based charity by Harry Lee – one of their members and Youth Ambassador for Nighsafe.