Christian Davies and his wife Mandy have donated their weekly beer money to Nightsafe during lockdown.

Christian would normally enjoying a few pints of Guinness at his local pub, the Millstone at Mellor – but lockdown has stood in the way of his regular evening plans.

For the month of May, the couple also donated 10% of their online sales from their business, Christian Davies Antiques in Darwen, raising a further £1,187 for the charity. 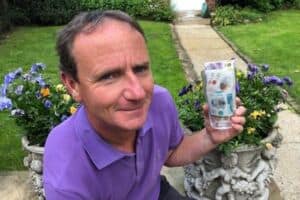 The couple chose to donate to Nightsafe after visiting their son in Manchester. They witnessed a number of homeless on the street and wanted to help his local homeless charity.

Despite everyone suffering challenging financial times, Christian said: “Some of my friends have congratulated me on deciding to donate rather than pocket the cash. I know I would’ve been spending that money down the pub so I’m happy to donate it to a worthy cause.”

This is not the first time that Christian has donated to the charity. Around 18 months ago, Christian rented his extra car park spaces and donated the money – equating to around £250 a quarter – to Nightsafe instead.

Christian said: “Jan from Nightsafe always emails us and says what your money has helped to achieve. That makes you feel so positive and better in yourself that you’ve helped someone.”

Christian and Mandy have vowed to continue to donate the £70 a week until the pubs reopen.

There are a number of ways that you can help people like Molly.